Snow was falling as we arrived in Malles, Val Venosta / Mals, Obervinchgau on the morning of Saturday 14th April as we set up the equipment for our experimental Yellow Day dye workshop with dandelions. Fortunately, ten participants braved the weather including local dyer and weaver Cornelia Larcher of Merano / Meran.  Inside the refurbished barn at Sockerhof the workshop facilitator, Prof. Alastair Fuad-Luke showed some recent test samples with dyes from dandelions, including a beautiful deep yellow produced on local Bergschaf wool yarn and a pale yellowy orange shirt overdyed from the original white cotton. He explained that the workshop today was really “speed dyeing” as normally it is better to soak yarns, fabrics and clothing for much longer periods in the preparatory baths and dye baths to expedite deeper colouring through more dye uptake. Nothing ventured, nothing gained – we hoped for some results. 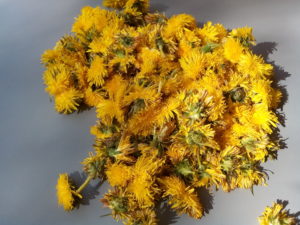 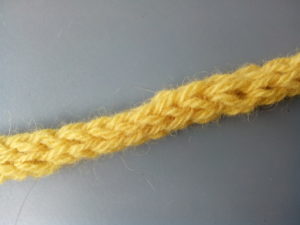 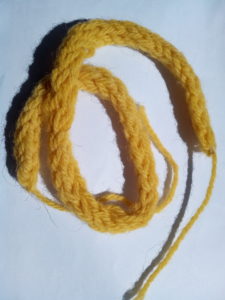 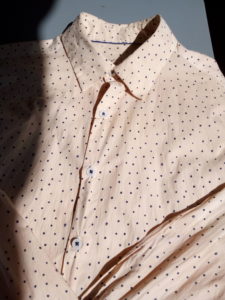 The participants began preparing samples for the dyeing baths by knitting and stitching with local Bergschaf yarn, unbleached cotton and cotton prepared for printing, all purchased from Aufburg natural fibres in Bolzano. 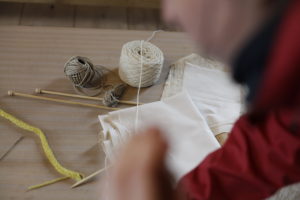 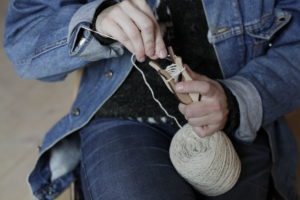 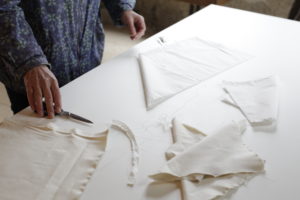 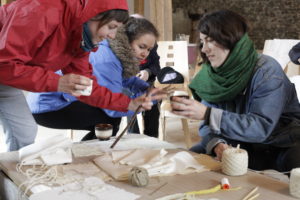 Some participants bought cotton garments and linen upholstery for over-dying. After an hour or so the samples were soaked in water with the clothing then introduced into the first preparatory bath of tannin solution, pH6.5. This was previously prepared using Fustic, a natural bark and an ellegic tannin at an equivalent weight of 15% weight of dry fibre, WOF. The tannin bath was held at about 90 degree Celsius for 45 minutes. Tannin helps “animalise” the cellulose, plant, fibres such as cotton and linen. It is not strictly necessary for the wool yarn as this is an animal, protein fibre that generally takes dye better than the cellulose fibres. However, the tannin also adds a pale base orange-yellow colour to the fibres that can act as a base for the yellows of the dandelion dye bath.

On completion of the tannin bath, all fibres, samples and clothes were given a rinse in water drawn from the natural trough by the yard of Sockerhof. This water was pH6, neutral enough for reasonable dying processes. After rinsing everything was placed in an acidic alum bath, pH4, again held at about 90degree Celsius for 45 minutes. This bath comprised potash alum, Potassium Aluminium Sulphate, 15% WOF, with cream of tartar, Potassium hydrogen tartrate/Potassium bitartrate, 5% WOF. This mixture is a mordant that modifies the fibres to enable more dye to be taken up by the fibres and, hence, deepen colour. 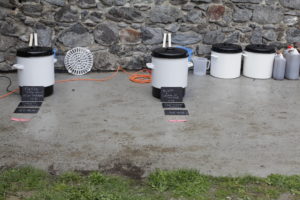 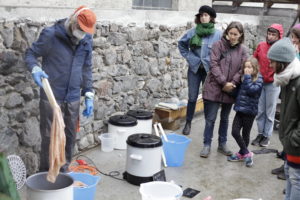 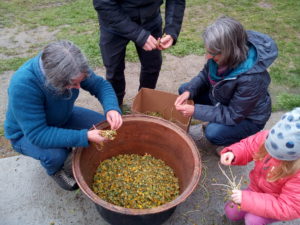 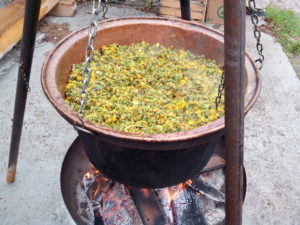 While everything was soaking in the alum bath, participants prepared the dandelion dye bath. To ensure plenty of movement of the fibres, samples and clothes, 45 litres of water was used in a large copper caldron. To this we added approximately 5kg of dandelion flower heads then was gradually brought to a simmer (88 to 90 degree Celsius) to encourage the dye in the flowers to enter the water in the bath. It took half an hour to get to the right temperature. After one hour we extracted the flower heads to leave a dark brown dye liquid in the caldron.

To avoid acid from the alum bath reacting with the copper, we gave all items a quick rinse in water before putting all the fibres, samples and clothes in the dye bath, then left them there for one hour. Gathered around the dyebath we were all glad of the warmth of the fire as the air temperature was persistently cold.

As if on cue the sun came out just as we pulled everything out of the dye bath. Everyone eagerly rinsed out their items to view the final colour achieved. Results were mixed. As expected dye take up on the cellulose fibres, with the exception of the linen that absorbed both fustic and dandelion colours, was poor. The wool colours were a different story varying from creamy yellows to pale orange-yellows to pale-mid yellows on some of the samples and lucet knitted woolen items. The contrast between the dye take up on the cottons and wool was aptly demonstrated by Cornelia‘s hand stitched “Taraxacum off.” (short for the Latin name for dandelion, Taraxacum officinale). 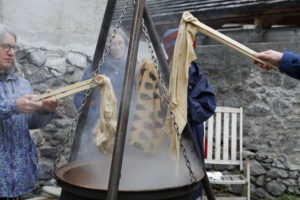 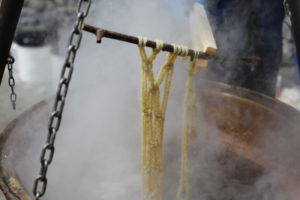 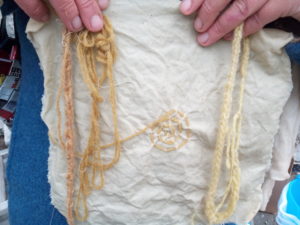 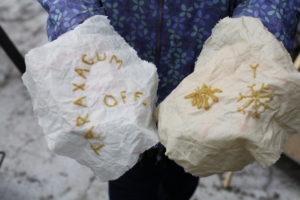 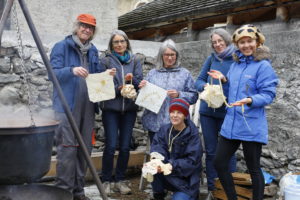 Given the short bath times this was a successful result and promises better colours when a longer steeping times can be followed. It is also possible that the copper interacted to “sadden” colours (compare the original sample tests in the photos at the head of this article with those obtained in the Yellow Day dying) or that we could not get the temperature sufficiently controlled with the open fire on the caldron – temperatures varied between simmering and 70 degree Celsius.

The workshop results verify that dyeing with dandelions has potential for further experimentation with local wool types in South Tyrol and to explore the utility of differential take up of dye on cellulose and animal fibres.

As the smiles show from the participants, it was a chilly but rewarding day for those who took part in the workshop, part of the larger four-day festival in Mals / Malles for the Hier und da festival.